Remember when we talked about plans? Yea I still haven’t learned my lesson. I still put my hopes in a plan and get a little more than slightly disappointed when it doesn’t go my way. But let’s be honest I wouldn’t be Aysia if I didn’t do just that.
In one of our lamaze classes the teacher asked a question.
“What is one trait about your partner that you hope your baby has?”
Now the quick answer to this for me would be Briean’s sense of humor. And if you’ve ever been around him then you fully understand why. His humor is one that can literally crack up a room. But that answer wasn’t the one that came to me.
Contrary to me, Briean is very much a “go with the flow guy”. Don’t have my size? No biggie. Maternity pictures had to be cancelled? It’s fine! I mean I have very rarely seen him get genuinely upset about pretty much anything. And on December 29, 2017 that was just the trait I needed. 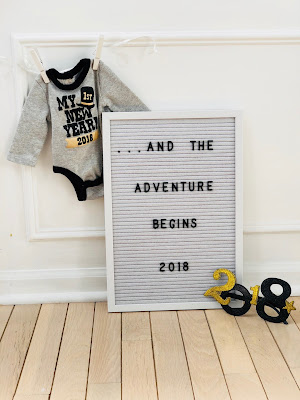 I had a plan. I definitely had a birth plan. I’ve had the same vision of my birth for years. I wanted a quiet environment, with a midwife, a pool, essential oils, candles, the whole nine yards. I wanted a natural unmedicated birth with as little to no interventions as possible. Well let’s just say God and baby boy had a whole different set of plans.
From the time I arrived at the hospital to the time my son was born almost nothing went according to this plan.
Due to high blood pressure I was unable to be on the “birthing center” floor like I had planned. Strike number 1. After 1 hour on the traditional labor floor, unmedicated and with the assistance of a shower, I moved very quickly from 3cm dilated to 7cm. It seemed like things were finally getting back on track. Yea… right. 13 hours later, little man moved a whopping extra 1cm to get me to an 8. Let’s just say things were NOT progressing. Baby boy was in a ROP position; right occiput posterior. Long story short, he was giving me back labor like nobody’s business. This along with my small pelvis was preventing him from moving down. After multiple position changes, conversations and much persuasion the midwife urged me to an epidural and Pitocin. Strike number 2.
Now the pain relief was VERY much present after that epidural but so was the feeling of disappointment from a plan gone wrong. Nonetheless the show had to go on. After about an hour and a half rest, some food and family time it was time to recheck baby boys location. Another whopping 1cm. 9cm. That was it. About 18 hours in and we were at 9cm.
At this point, my plan not only was thrown off gear but it was set to fire and blown to pieces. It was time to talk “other options”. And by “other options” my midwife meant a C section. Clearly I was NOT happy. Strike number 3.
But this is where Briean’s lucky trait came in. Between multiple sobs, tears and dry heaves he was able to give me the pep talk of a lifetime. Reminding me that having this c section was not giving up. Nor did having the c section signal defeat. In fact it meant quite the opposite. It meant victory. After almost 20 hours in labor we were about to win the game. We were about to walk away with the homerun we came there to get.
Tate Boddy-Calhoun born at 9:15pm via c section. At 6 pounds 11 ounces he was everything our hearts could hope for and more. A major plus? He looked just like me. And to be honest, after 14 hours of unmedicated back labor, he better. 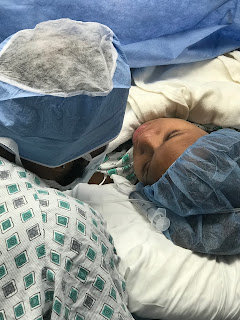 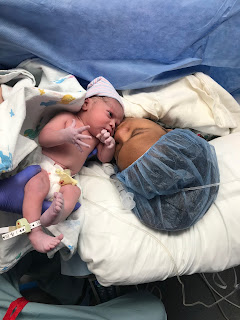 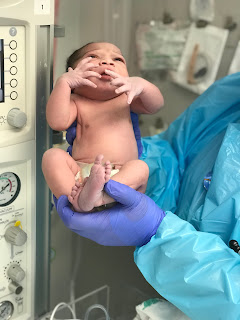 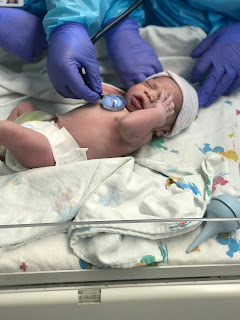 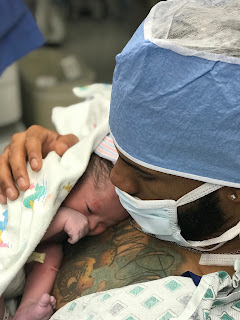 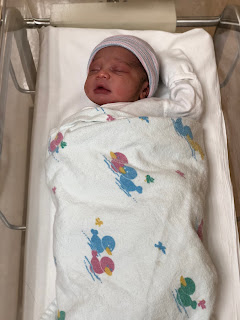 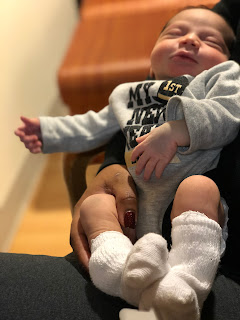 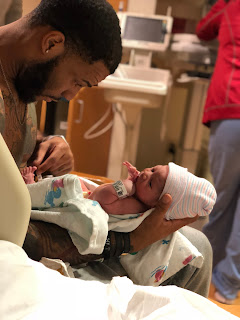